A Giant of an Imagination 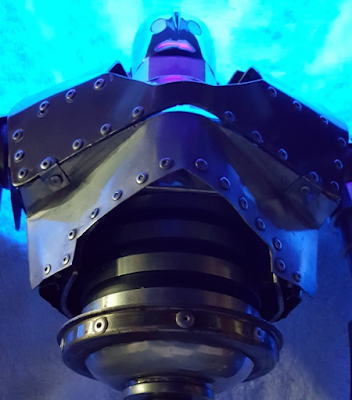 Inspiration lends itself to imagination, and out of imagination one's truest loves are revealed.  This is true of any creative person, and in this case, it's true of a good friend of mine.

Jesus "Chu" Rivera lives three doors down from me, yet it took nearly five years for our kindred spirits to strike up a friendship.  It was our aimless talent at spouting out movie quotations that caught each other's attention by accident.  The Shining (1980) is a particular favorite film of ours to quote, and it wouldn't be out of the question for Chu to cry out "Wendy!" from around a corner.  From a distance, one could easily dismiss Chu as a motor head - whose interests don't extend beyond the hood of an old truck.  But in his presence, one will discover a man of God, who has a giant of a heart, and I'm proud to call him my friend.

Those who enter Chu's basement realm will find themselves entering a time machine.  There one will discover that Godzilla has walked and Kong has roared.  Batman lurks in the shadows and Christine's engine seemingly purrs from the walls.  Various treasures of varying sizes adorn and fill every square inch, from miniature Popeyes to hovering zeppelins, vintage bicycles to a 1950s truck, an electric guitar to a booth from a 50s diner, and that doesn't begin to scratch the surface.  The reassuring colors of Coca Cola emanate from the room along with the depthless voice of Johnny Cash.  Chu's alarm clock to the world on summer mornings is the rev of his Indian motorcycle, which he has been known to ride donning an authentic Indiana Jones' jacket and matching Fedora.  But, he'd give it all away to spare his most prized possession - his Iron Giant. 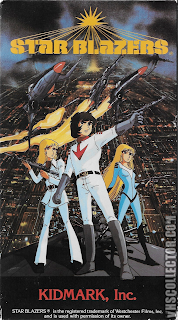 "When I was a child…I grew up watching Star Blazers while the world watched Bugs Bunny and Fred Flintstone," Chu shared.  "And that TV show – the sci-fi aspect of it – it attracted me, and I loved that style of cartooning and the story that was behind it."  Chu's unique taste in animation at a young age was coupled with his love for his father's time as well.  "I love the 50s due to my father – he’s a hero to me - and anything associated with my dad – including that era – stuck in my life."  Chu continued by adding, "I always liked the Space Age...it was an age of discovery.  It was like Columbus all over again."

It's no wonder Chu gravitated to The Iron Giant (1999) upon its video release in late 1999.  The VHS cover of the film alone was probably enough to churn his loves within.  "I bought the movie, I took it home, and I was so awestruck by the story, and the soul that they gave this machine, and the relationship that little boy had with that robot.  It was great!"

It didn't stop there.  From inspiration came imagination, and from imagination Chu's love for the film was extended. 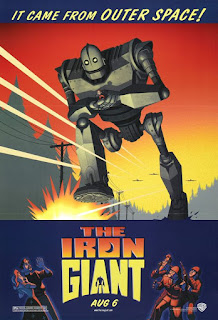 "Prior to my discovering this movie [The Iron Giant], I’d always been a toy collector, and I always thought that my toys would come to life at night (he laughs)...just like in the movie Toy Story (1995), years before that even came out...so, maybe a month after I saw the movie [The Iron Giant], I started getting a nagging feeling to build him.  I said, 'I can build him – I have enough knowledge in me, with machines, and imagination, and enough patience, that I can build this thing and see it through.'  I knew it was going to be tough, it wasn’t going to be easy.  Where was I going to get bits and pieces for this thing?  Every single piece on this project was hand-built by myself, except for the calves.  The calves I had to get something real sturdy, so I bought some cylinders that were good for the project.  But everything else that’s on this is hand built from scratch; cut; riveted; whatever...I must have 125 hours on the head.  The head is solid stainless steel.  Anyone who’s ever worked with stainless steel knows that it’s not easy to shape; it’s not easy to grind; it’s not easy to drill.  It’s a material that is very difficult to work with...no welding was done in its creativity.  It’s all been bolted or riveted together...I knew that if I was patient, that the-end-result was going to be beautiful." 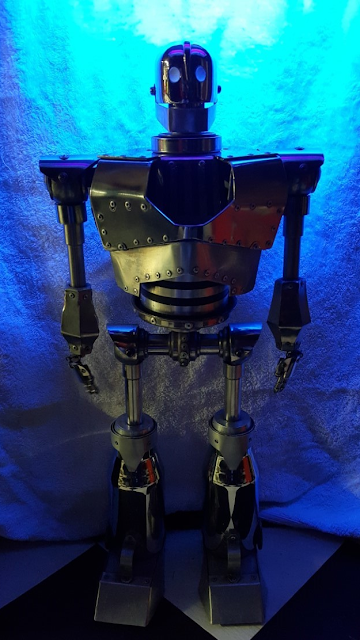 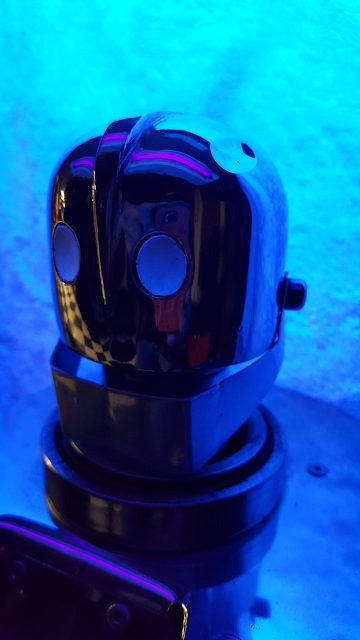 "As I was building this robot, I poured my heart and soul into it.  And upon completion of it, and watching it, and as it went along, and watching the way it ended up being, I learned to love it…when I created him, it feels as if I created a life."  Chu's young daughter sees life in its eyes as well to this day.  Chu shared, "She walks by and says hello to it as if it was alive." 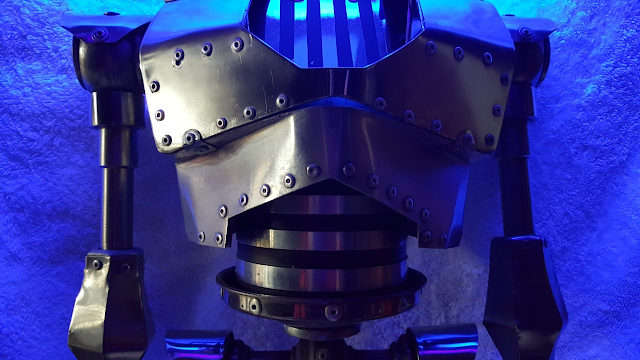 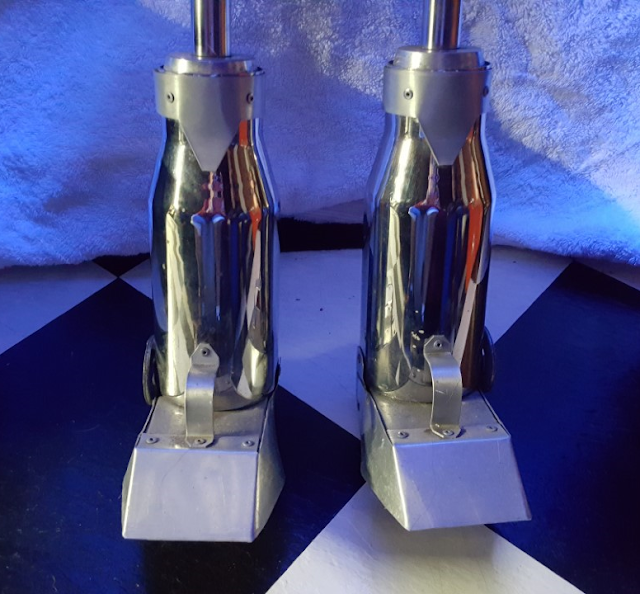 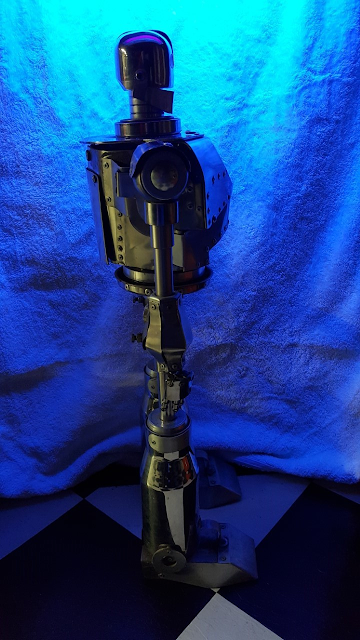 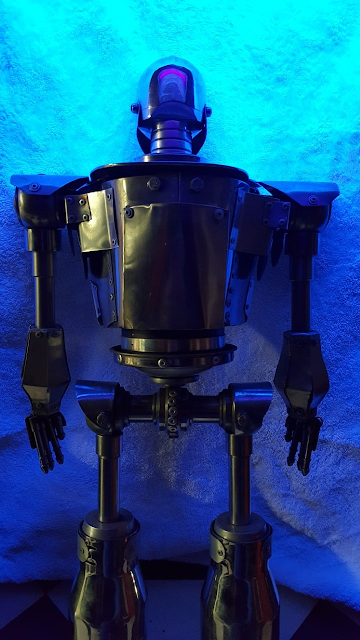 It took Chu two years to complete his very own Iron Giant, and near its completion, an opportunity to share it with the world came knocking.  On the weekend of March 24, 2001, Chu exhibited his creation at the East Coast Hobby Show at the Expo Center in Fort Washington, Pennsylvania.  Of the hundreds of exhibitors, Chu's Iron Giant came in first place.  For Chu, however, winning wasn't the icing on the cake.

"Within minutes of setting him up on the table, there was a father…who had his son on his shoulders.  And the little boy must have been three or four years old.  And this little boy, at the top of his lungs, yelled at his father, 'Daddy!  Daddy!  The Iron Giant!'  That moment was special because that little boy reminded me of me when I first saw the movie, because that little boy is still inside of me."

Since the 2001 exhibit, Chu has found himself asking, "Where’s he going to end up long after I’m gone?"  In answer to his own question:  "My hope is, someday, to have him displayed somewhere where children can go and see him and enjoy looking at it; become acquainted with the movie; and who knows what it will inspire them to do?" 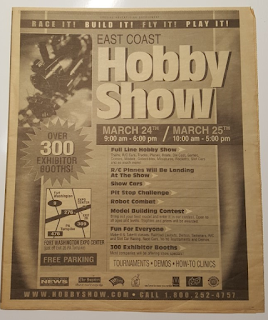 When asked what he would say to Brad Bird if given the chance, Chu said, "My hat’s off to you.  You hit a homerun with this project that you and your team came up with, and I thank you for sharing that imagination with the world."

For those lucky enough to be welcomed into Chu's home, don't be surprised if his Iron Giant is the first thing he introduces you to.  For him, it personifies not only his love for Brad Bird's film, but everything Chu stands for.

"If you watch the movie closely, when he [the Iron Giant] was met with aggression, he reacted with aggression.  If you notice carefully, the attention and love that little boy, in his innocence, showed this machine...you know that this story is based on love and respect for other life; even though he was a robot.  The little boy didn’t see him as such.  He saw him as something that was alive and that could learn how to get along with others and not be what he was designed to be; which was a weapon of mass destruction.  If you surround yourself with the right people, you can change for the better, and that little boy proved it with this robot."

I think it's a lesson, in today's world, that many of us could learn from. 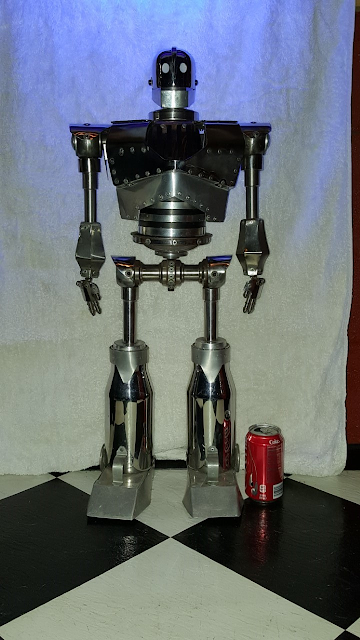