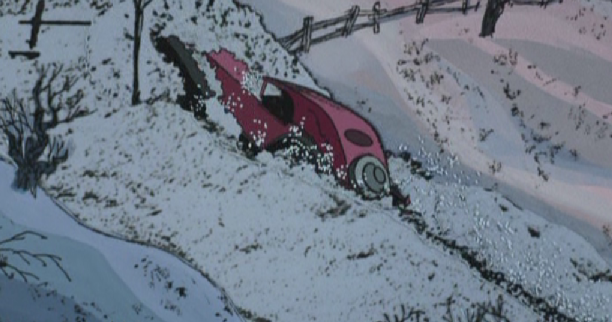 This post attempts to shed some light on the magic that went on behind a scene in One Hundred and One Dalmatians (1961) that caught my eye as a kid. It's the segment when Cruella De Vil's car skids off the road into a snowy ravine. When viewing it on VHS as a youngster, I noticed an unusual change in the snow's texture and animation.  It appears gritty, and moves and rests awkwardly on the background.  This is especially evident when De Vil accelerates up the snowy embankment.

To begin, animated films during Walt Disney's lifetime were put together in a way that is very different from today. Computers have changed everything, and the process of incorporating animation, color, background, and sound into a feature length animated film has greatly reduced the production time on a film.

In the olden days, Mickey Mouse was first drawn by animators onto animation paper in a series of very subtle positional changes. When an animator stacked and flipped those drawings together, Mickey seemingly moved before their eyes. It took twenty four drawings (or frames) to fill one second of film.  If you do the math, about 11,500 drawings were created for an eight minute cartoon.

The animators' drawings were then traced onto clear celluloid paper with ink, and painted with vibrant colors by hand (from the late 1920s to the late 1950s, this was a job for the women of the Walt Disney Studio).  Once the celluloid paintings were dry, each was photographed, one-at-a-time, over painted backgrounds - in perfect sequence - using an animation camera.  Not only were the short cartoons made this way, but so were full-length movies like Snow White and the Seven Dwarfs (1937), Pinocchio (1940), Fantasia (1940), Dumbo (1941), Bambi (1942), Cinderella (1950), Alice in Wonderland (1951), Peter Pan (1953), Lady and the Tramp (1955), and Sleeping Beauty (1959).  The production time and expense for each varied, but could be quite extensive.  For a visual explanation of this process, I encourage viewers to watch the following segment from the 1938 production, How Walt Disney Cartoons Are Made:


During the making of Sleeping Beauty in the 1950s, Ub Iwerks (the animator who drew the first
Mickey Mouse cartoons in the 1920s) improved upon the animation process by developing a new machine. Rather than tracing every drawing in ink by hand, the machine copied the animator's work directly onto the celluloid sheets.  It was coined the Xerox process, and although it was minimally used on Sleeping Beauty, and on the entire animated short, Goliath II (1960), One Hundred and One Dalmatians was the first full-length animated film to use it exclusively.

Animators at the Walt Disney Studio valued the Xerox process because their drawings were no longer lost in translation, and presented in their truest form.  Layout artists (artists responsible for staging a scene) also took advantage of this process to film the scene of Cruella De Vil's car stuck in the snow. These artists posited:  If drawings of Dalmatian puppies can now be copied directly onto celluloid, why can't a photographed model of De Vil's car be copied as well?

The team of artists began by building a small cardboard model of the car with every linear and curved edge of the body outlined in heavy black lines.  These lines, essentially, acted as the pencil lines you would see on a drawing. The remaining surfaces of the car were white, much like the areas of an animated character that would be colored later. This is what the actual model of the car looked like: 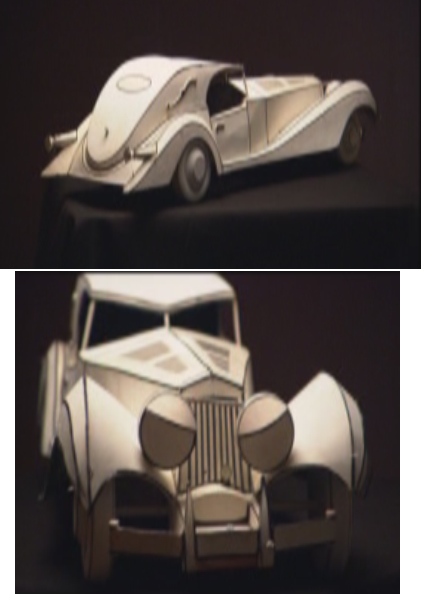 The car was then photographed in a series of hundreds of subtle positional changes using the stop-motion animation technique (the technique used for the 1960s Rudolph the Red-Nosed Reindeer TV special and The Nightmare Before Christmas).  The photos the layout artists took, essentially, became the animated "drawings." Each photo (or frame) was then copied, one-at-a-time, onto celluloid sheets using the Xerox process. From there, the white areas of the car's body (now transparent on celluloid) were colorfully painted by hand.  Once the painted celluloid copies of the drawings dried, they were filmed, one-at-a-time, over painted backgrounds just like in the Mickey Mouse cartoons.

But, what about the snow?

As you can see in the archived photos below, every time the layout artists inched the model car forward through the faux snow, a picture was taken. The snow looks disjointed in the finished scene because it was painted over in white (with existing black specking from the Xerox process for contrast) on the celluloid copies of the photographs. 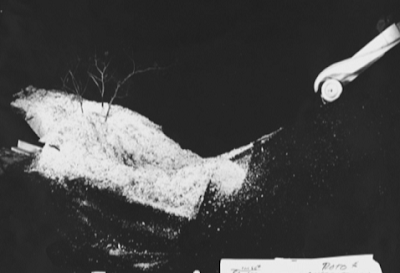 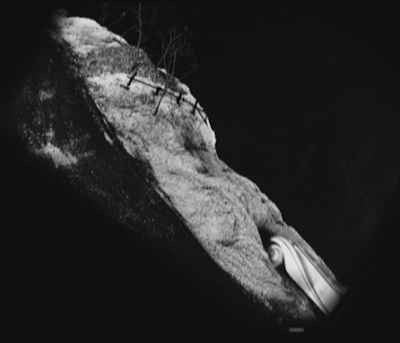 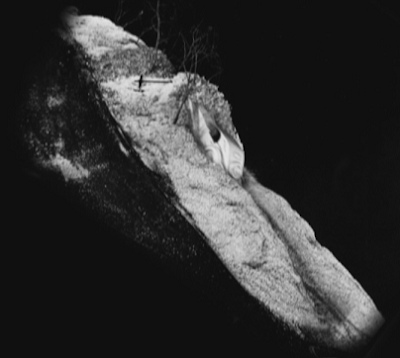 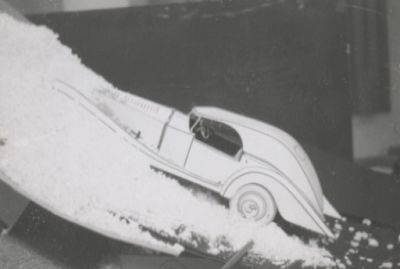 Now, let's watch the scene as it appears from the 1:02-1:15 time marks of the video below (try to visualize the cardboard model car as it appears in the photos above instead of what you see in the final, colorful product):

Disney animator, Floyd Norman, who worked on this sequence of the film, sheds even more light on the magic behind its creation in a posting on his blog HERE.

In the end, we may be left with a scene that is inferior to the technological advances of today's age, but it was a product of its time. A scene of this caliber was considered new and exciting for its time, and it worked. As awkward as it may look today, I can't help but gain a greater appreciation for a time period in Disney Animation when effects were made by hand.
Posted by Vincent Randle