"He is Very Happy" 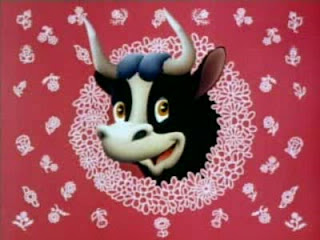 On November 25, 1938, one of Walt Disney’s most celebrated animated shorts made it to the big screen. The film is the Oscar winning, Ferdinand the Bull. This posting not only celebrates the brilliance of this classic cartoon, but an artistic force that helped bring Munro Leaf’s timeless 1936 story (and Robert Lawson’s beloved illustrations) to visual life.

Our story begins in 1934 with a young man named Ken Anderson, who at the time was laid off from the art department at MGM as a result of the Great Depression. With the chance that the studio might hire him back, Anderson recalled that he “confidently got married,” and spent his first month of marriage living on the beach, surviving on canned beans. Needless to say, Anderson desperately needed a job, and history would not regret the day he walked through Disney’s doors. Like all greenhorns at the Disney Studio, Anderson started off as an "inbetweener," and quickly moved his way up the ladder. His animated contributions can be seen in a couple of the Silly Symphonies shorts, including The Goddess of Spring, and most notably, a challenging scene in Three Orphan Kittens. In the latter, Walt Disney wanted Anderson to develop a scene where a kitten scurries across the floor of a house while the background pans in sync with the animation. Anderson stated that “it [the animation] jittered like crazy," however, the implementation of perspective in this 1935 classic was successfully achieved.  The scene can be viewed at the 5:13 time mark in the following video:


When it was decided that Disney would adapt The Story of Ferdinand into an animated short, Anderson was assigned to art director; a role that he had just proven his worth on for Snow White and the Seven Dwarfs. Ferdinand the Bull (the name Disney adapted it to) is a true product of the Disney name, because it not only combined the talents that brought Snow White to life, but it also furthered the advancement of animation through the use of color and light.  With Anderson's arrival at the Disney Studio, came a wealth of experience and architectural knowledge (the knowledge Disney was aware of when preparing the scene for Three Orphan Kittens). In fact, prior to being hired, Anderson was a “recipient of an architectural fellowship in Europe," where he particularly fell in love with the country of Spain. This experience ended up being a stroke of luck for Anderson since Leaf’s classic tale takes place in the very country that stole Anderson's heart. Ken Anderson knew from the very beginning that Spain needed to be presented in its true and natural form.


In a televised episode of The Disney Family Album, Anderson shared some of the conditions set by Walt Disney when creating backgrounds for animated films. For starters, Disney absolutely “hated” the idea of using purple in the backgrounds of his work. Anderson stressed that Walt had a keen eye for ensuring that animated characters were not overpowered by backgrounds, so tinted colors were used as a safeguard. Anderson explains that the tinted colors were applied to long sheets of paper that could be rolled, or pulled, in a given direction within each frame to provide a character with a sense of movement from one place to the next. It worked very well, and Anderson speculates in his TV appearance that it was quite economical, but he was ready to take it one step further with Ferdinand. Anderson believed there was only one way to bring Spain to life, and that was through painted backgrounds. It was this train of thought that particularly worried fellow members of the Disney staff.
In his interview with Don Peri, Anderson shared, “I knew that the way they were used to handling things in shorts that it [the background] would just be a tint (Peri, 2008).” Despite Walt’s wishes, and pleadings from the head of the art department at the time, Anderson decided he would paint the backgrounds, and he found support in the supremely talented background painter, Claude Coats, and “a guy named Art Riley (Peri, 2008).” Anderson continued:

It was over his [Walt’s] dead body that we got as much color into it as we did, and it was still poopy. It was nowhere near what we were trying to do, but in order to not make the head background man mad and still do what we thought we needed to do – we weren’t really thinking so much of pleasing Walt as doing the best thing we knew we should (Peri, 2008).

The ideas that Ken Anderson and Claude Coats brought to life were rather revolutionary in the field of animation at that time. Never before had reflective light, or in Ferdinand’s case, the way the hot surface of Spain’s earth seems to glow from the intensity of the sun, been used in an animated film. Their work exuded the heat of Spain with the use of under lit shadows and hot colors. The timing to experiment was perfect considering Disney was away on a trip to Europe. The question was, would he like it? To Anderson and Coats' great surprise, Walt loved it!

When you compare Robert Lawson’s illustrations from the original book to Anderson and Coat’s lush backgrounds, they compliment each other very well. Both stories open on a castle in Spain, and close with a scene of Ferdinand contently sitting under his tree; not to mention under a beautifully painted sunset sky in Disney’s version, with swirls of purple!  After its release to theaters in November of 1938, Life magazine wrote:

To Robert Lawson’s celebrated drawings have been added Walt Disney’s sly and cock-eyed genius and a hilariously purring sound track by Radio Announcer Don Wilson. What emerges from this combination is a completely charming creature with a benign white nose who threatens to supplant Mickey Mouse, Donald Duck and Lone Ranger’s Silver as the most beloved animal of the movies (Grant, 1993).

A variety of factors and talented individuals made this assessment of Disney’s version more than true, but one must especially tip his hat to Ken Anderson. Much like the flowers that awaited Ferdinand’s triumphant return to the countryside at the story's end, the beautiful art that awaited Walt Disney’s return from Europe echoes the feeling both would feel in the final line of Munro Leaf's beloved story: “He is very happy." 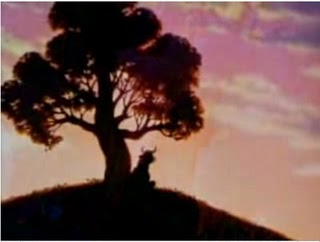